Do you have a lot of old pillows? Are you a collector of fabric squares like me? Do you have a dog? Want to add color to the floor of your bedroom? This project is for you!

Step 3. Choose 8 fabric squares from your stash. Since the bed will lay mostly flat I choose two different color schemes. The first one is subdued and reflects my more modest sense of taste. The second set is wild which would be colors my boyfriend would choose. I can flip the bed to adhere to the decoration of the room.

Step 4. Sew the squares into two large rectangles shown in the second picture below. 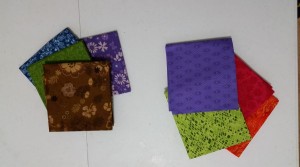 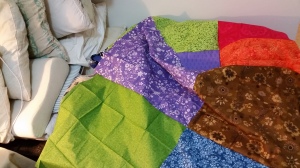 Step 5. Sew the two rectangles right sides together. Make sure to leave a hole large enough to shove the old pillows inside.

Step 6. Stuff it with pillows. First cut the pillow open and take out the inner stuffing, this is all you need.  But be prepared, the old pillows have years of dead skin cells and weird stains that come from YOUR head, they won’t shake out of the pillow so do not fret.  On the plus side the dog bed will now smell like you which your dog will dig. I was able to get 4 pillows into mine. Since they’re old they all have funky shapes, but that makes it better for my puppy so he can lay on it according to his tastes.

Step 7. Sew the opening closed. I did this with a machine because I don’t mind visible seams. If you wish to hand sew, make the stuffing hole smaller.  The most difficult part of this project was supporting the bed while sewing as to not break the needle while also trying to feed the seam into the sewing machine to keep a straight line.

Step 8. Using embroidery thread or similar width/strength thread put 4 ties into your pillow to keep it from getting bunched up down the road.  I considered adding a 4th tie to the exact center, and I might still do that, but I like it as-is for now. 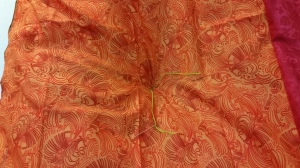 Step 9. Test the bed. As soon as I laid the pillow on the floor, Blue knew it was for him. The pictures below are with Blue on either side of the pillow. 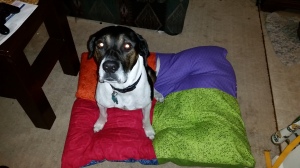 After I moved it to our bedroom, Blue used it to sleep at night!! He loves it. I’m a bit sad because he will only spend a half hour on my bed with me before he moves to his bed, but at least he isn’t on the floor anymore! As you can see below he is really good at looking sad, so it’s hard to live with him and not give him everything he wants.