This quilt was planned for a wedding this past August. They both love Game of Thrones and the Elder Scrolls so I went with a medieval theme. The top right is the groom’s crest and bottom left is the bride’s crest. These field is split by a row of purple (a royal color) and wedding rings encircle the center. 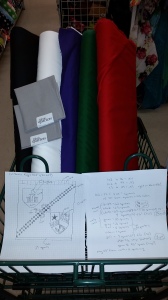 First I made the bride’s crest using my typical square patterns. The stars and half moon will be sewn on later. 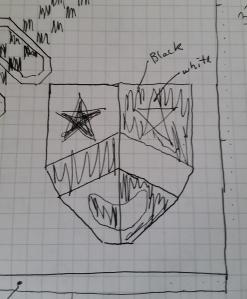 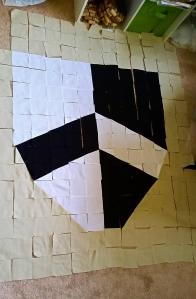 After these are laid out on the sewing room floor, I have to gather them up and label them to be stored for later.

The same was done to the groom’s crest.

The rings were a special problem. Here is how I did them. First sew two squares together diagonally, then cut the excess. For the purple squares, I just ironed them in half to get a good line.

Then I took one of the “excess fabric” triangles that I just cut off and placed it on the gold side. I folded the fabric in half and ironed a line.

I then flipped the free triangle and put a seam on the far side of the line.

Iron it! Then line all the squares out. I had to do it twice for both rings, the diamond was sew on later. 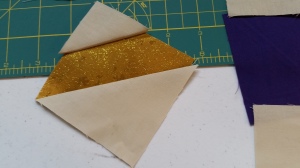 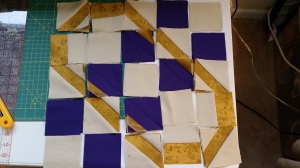 One side all sewn together ready for it’s accents. 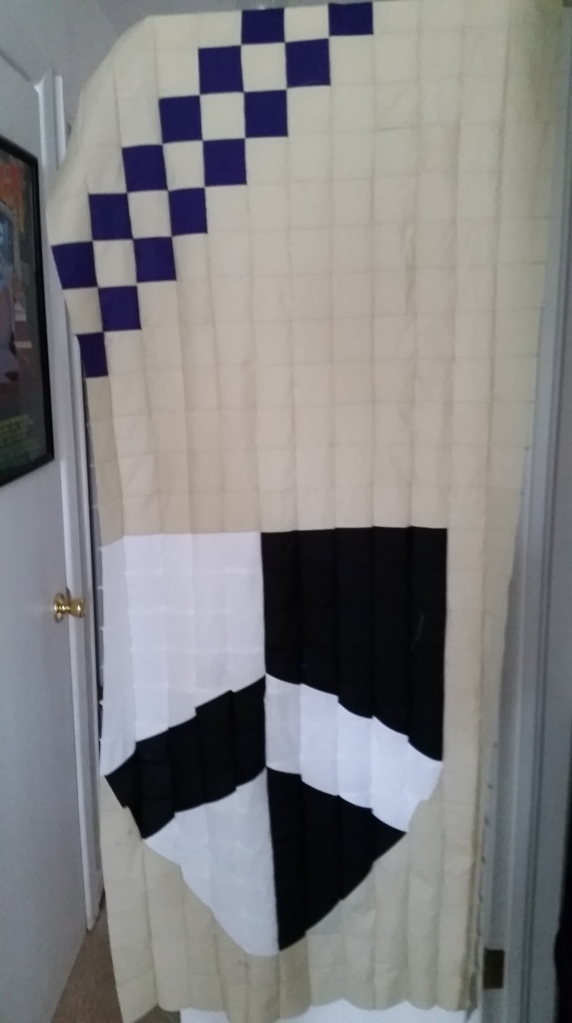 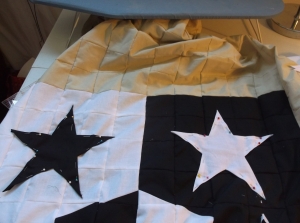 The other side all sewn together.

The finished product on the recipient’s bed!

To make the groom front I pinned the two panels together as shown below with a piece of white fabric as the “undershirt” – do not sew. 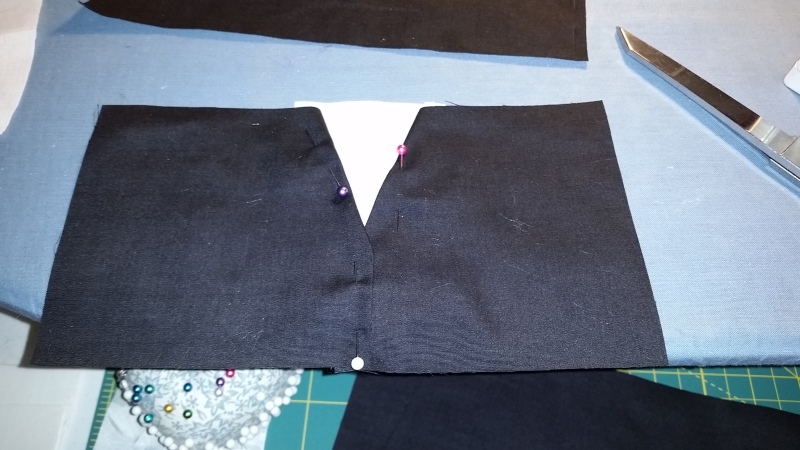 For the bride front I first gave the skirt a hem on three sides by folding the edge over twice and sewing. Then I pinned the skirt between the two white panels giving it ruffles and make sure to keep it at least a half inch from the edge. These were sewn together with a 1/4 inch seam. 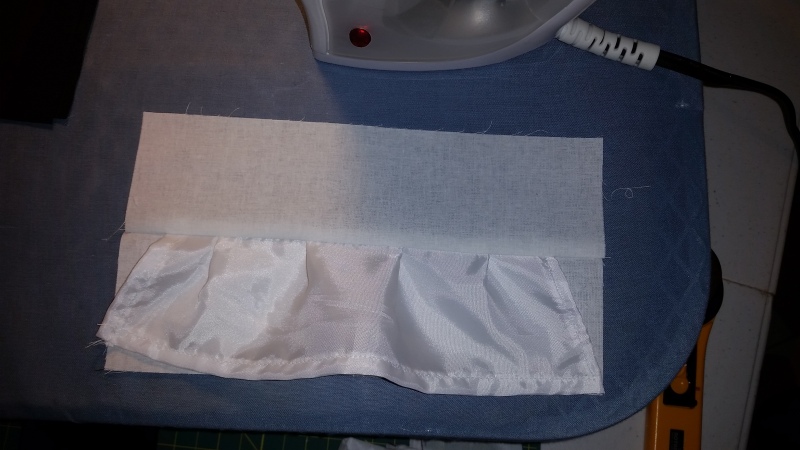 For each the bride and groom the front was sewn to the back, right sides together. Be sure to pin in the skirt as shown below so it does not get caught up in the hem, and sew with a 1/4 inch seam leaving a 2-inch gap on one short side to be able to reverse the coozie. 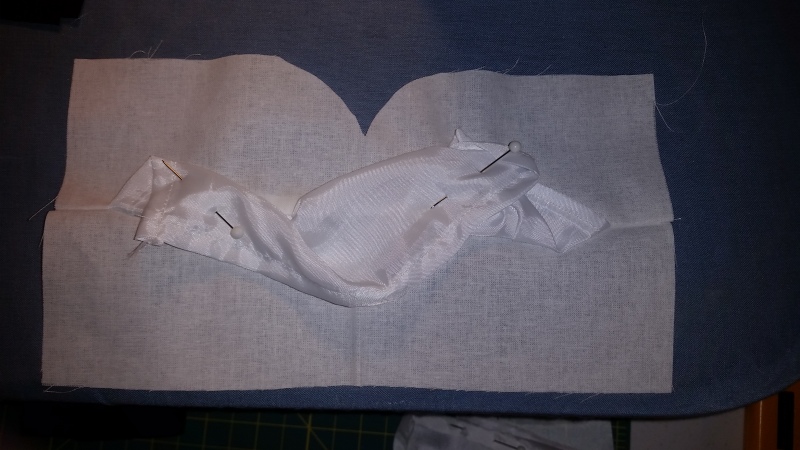 After the coozie is reversed, put the two elastic bands folded in half into the open section and pin. Then give it a hem around all 4 side, reinforce the elastic bands with another pass over that section. For the groom sew down the front along where it should still be pinned, the groom was done with black thread, it was the only time I had to switch thread. The final move is to sew buttons on the opposite side of the elastic.

The veil was made with one zig-zag seam with the top of the ribbon folded over by a half inch. Then an elastic band was inserted in the loop, and sewn closed. Flowers were sewn along the front of the band. I also put a matching flower on the groom’s coozie in the pocket area. 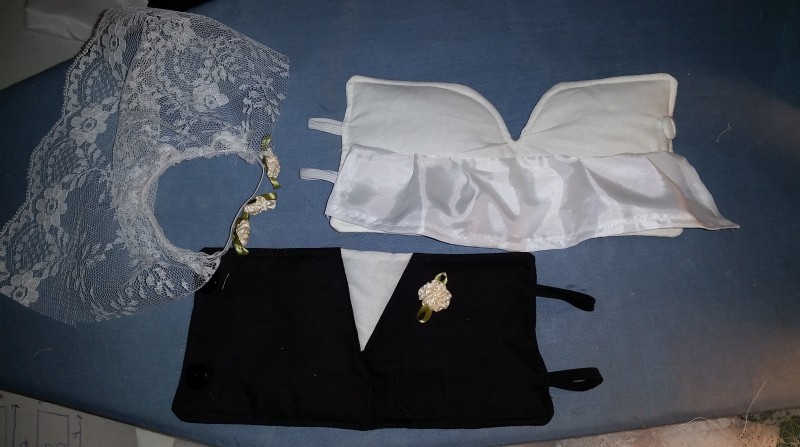 Final products shown on a bottle before flowers were sewn on.

Two of three couples that were recipients shown below. They loved it and that was the real purpose of making these! 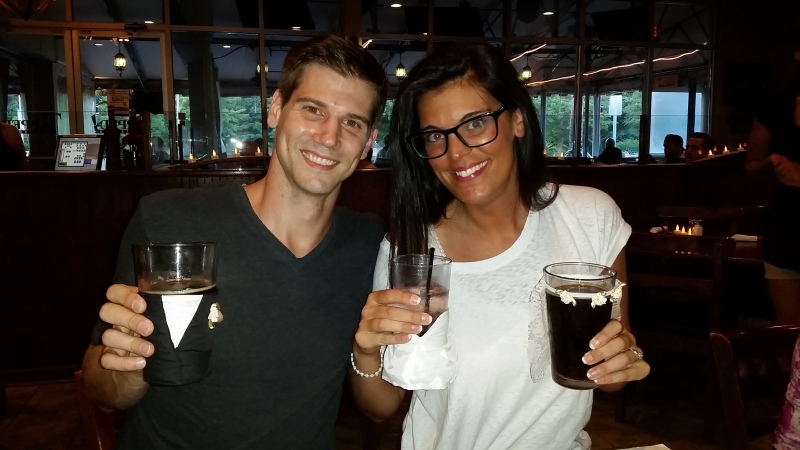